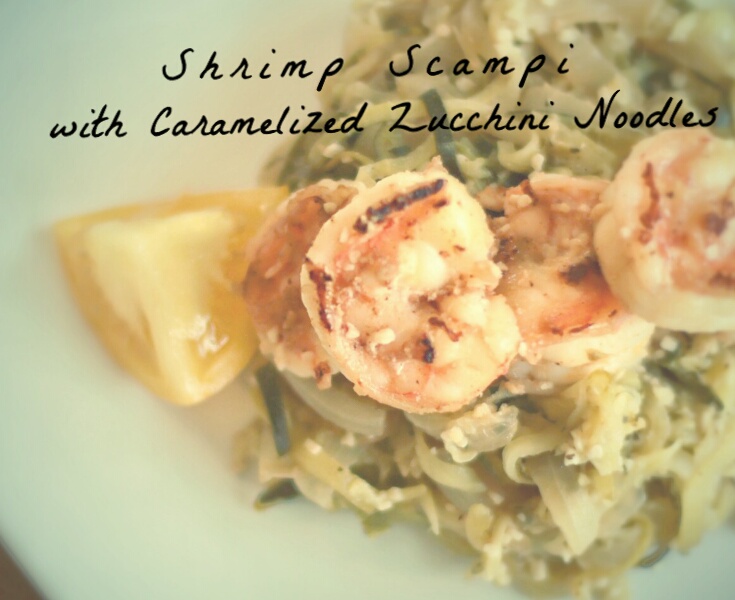 Whenever I see recipes for zucchini noodles I think to myself: Do they really even taste good, or am I going to miss actual noodles?? They look intimidating & time consuming. Today though, I’m feeling brave!

The plan: To make Caramelized Zucchini Noodles with Shrimp! I’ll be making a healthier take on Shrimp Scampi. My first priority: finding something with great precision that will give me those lovely noodles. I headed out to the store with a mandolin in mind. However, in the same aisle, a few products down was a better tool for me: The Vegetti. It claimed to be specifically designed for creating noodles out of vegetables. It was a lot less scary looking! Plus, it was $20 cheaper. Sold!

Next, I picked up four, large zucchinis (turns out i was feeling a little overly ambitious). When I actually got home & started cutting the noodles, two zucchinis turned out to be plenty for my little one & I . Plus, saying i got quite the arm workout from twisting those zucchini in to the veggetti would be an understatement.

I have to be completely honest: I didn’t get the hang of the veggetti until I was almost done using it. Most of the zucchini ended up coming off in one inch noodles. However, I finally got a rhythm down and gorgeous long noodles prevailed. Just don’t get discouraged if they don’t come out looking “instagram worthy” on your first try. I can assure you they still taste delicious, which is of course always the most important thing!  I kept my “noodles” in a bowl to the side. 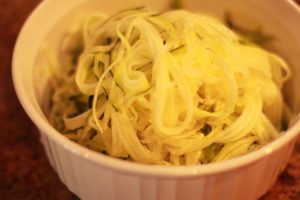 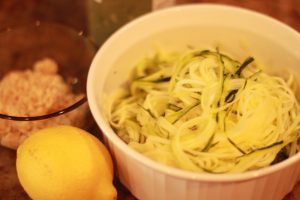 Than, I took a large sautee pan and drizzled some olive oil in it, setting it to med-high heat. I threw some sliced vidalia onions in my pan (This is totally optional, I love the added flavor). I added the crushed garlic. While my pan was heating up I seasoned my shrimp. I have a go to Shrimp Seasoning that I use 9 times out of 10 (you can find it below) Because, it is that good. It browns the shrimp nicely and it’s the perfect combination of spice!

Next, It took my shrimp and placed them evenly in the pan with the onions. The great thing about shrimp is they take barely five minutes to cook. They are so quick, easy, and healthy. I used to be afraid of cooking shrimp, because I just didn’t know how. It wasn’t something I did often. I didn’t want to overcook them or undercook them. Now, I literally always keep shrimp in the freezer. For those crazy busy days where we’ve just been going non stop and 6oclock rolls around before i’ve even thought twice about dinner. I know once i pull those shrimp out there are a million different tasty dishes I can make . Plus, thaw to cook time within a dish is less than twenty minutes. It doesn’t get much better than that.

Once you can see that the bottom half of the shrimp have turned pink you can start flipping them , so they cook evenly. After another minute, I turned up the heat to high & poured a generous splash of white wine in. I let them cook on high for another 60 seconds until the shrimp had browned . Turning the heat down to low-med I focused my attention on the “noodles”.

I quickly seasoned the zucchini. A little bit of salt & pepper to taste. I added my two tablespoons of crushed garlic (I really like garlic, what can I say?) I squeezed a little less than half of a lemon on them. By this point the shrimp was exactly where i wanted it. I transfered the shrimp (only the shrimp) to a separate bowl on the side. I left the onions in the pan with all of the juices. I wanted them to caramelize a little more. Also, i wanted them to add to the flavor of my noodles. 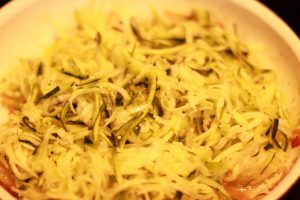 Tossing the zucchini into the pan, i was sure to stir it around so it was evenly covering the pan. I turned the heat back up to high and added another large splash of wine. You can use any wine for this. It is said dry white wines are usually the best for shrimp scampi. I generally don’t follow rules in the kitchen though. When cooking with wine, my rule of thumb is always to use whatever wine i happen to be drinking at the moment. So, tonight I’m using sweet white by Roscato. It’s one of my absolute favorites because of its very slight carbonation and the apple, peach, and citrus notes. I also know its going to pair great with the seafood and pasta when i sit down for dinner! 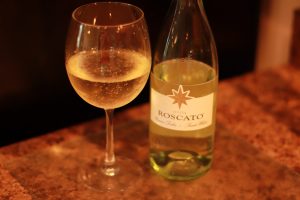 After about 8 min on high heat, i turned the pan down to a low-med and let it sizzle-simmer for about ten minutes. You can cook this to your desired texture. This dish is also commonly done with raw zucchini noodles. However, I wanted them to resemble the texture of noodles as closely as possible because i would later be passing these off as nutritious lies to a four year old. If all goes well, any way..

After plating the noodles and topping them with the shrimp, I realized I had some really nice yellow tomatoes sitting on the counter from the garden. I sliced them up and placed them around the “noodles”. Even though these were a complete after thought, they really, really enhanced the flavors of the dish!

All in all, these were amazing! Clearly, i didn’t get confused at any point during dinner about whether they were “real noodles” or not. The flavor though was so great, so was the texture. I didn’t miss using actual noodles at all. The biggest surprise though was that my little man ate his entire plate! I know some people say things like “Don’t lie to your child, tell them what the food is.” and that they need to just eat it. “You are the adult not them….” and blah blah blah. That doesn’t work for me though. He’s incredibly smart beyond his years (as all kids are) …and he’s also extremely stubborn. Plus, he’s four. So, there is that. Sometimes i have to resort to trickery. I’m not ashamed.

He was a little suspicious at first. Before I could get a spoonful in his mouth, he asked me with a quizzical look

“What is this though?”

“Its spaghetti.” I replied. He wasn’t buying it though, I could tell.

He mean mugged it, as if to say this doesn’t look like any spaghetti I’ve ever seen.

Play it cool,  i thought to myself.

“Well what KIND of spaghetti is it?” he asked this time.

“The kind you like. Its spaghetti with a yummy sauce and it taste very good.. and you’ll like it…its that kind, so just try it.” I insisted.

He finally did. He didn’t question it again. He actually liked it, which is the ultimate accomplishment for me when I’m experimenting with new veggie recipes. He even managed to mutter a few mmms.  Honestly, usually when i feed him vegetables that he isn’t interested in, after about four bites the jig is up.

So, I will absolutely be making this again. I’m already planning a take on chicken parmesan for the next go around. Very tasty and much easier than I thought! Here’s to small victories! 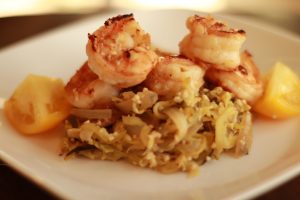 First, wash your zucchini. Than use The Vegetti to prepare your zucchini noodles. Keeping the noodle size as consistent as possible. Set those aside in a bowl.

Season your shrimp while you're waiting for your pan to heat up. Place to the side.

Add your sliced onions & crushed garlic to the pan.

Once, they have started to gain a little color you can add your shrimp.

When you see the bottom half of the shrimp turning whitish pink , they are ready to be flipped, so they can cook on the other side.

As soon as both sides are the right color, cook for an additional 60 seconds.

Make sure they are fully cooked than take your shrimp out of the pan, set them aside & turn your heat up to high.

Toss your zucchini noodles in with the onions and garlic in the pan.

Take your lemon and squeeze it over top of your vegetables.

Sprinkle your garlic powder over top.

Season with salt and pepper to taste.

When you can tell your pan is very very hot add a generous splash of your wine.

Let them cook on high for about 2 more minutes caramelizing them to your desired color.

Than turn your heat down to low, simmering them for an additional 6 minutes.

Plate them up, add your shrimp. Plus any additional toppings. I added fresh yellow tomatoes to mine.

I love to marinate shrimp. On the rare chance I’m just seasoning it, it’s got to be amazing!
Here is my Go To Shrimp Rub:

Stir all of this up in a bowl. Drizzle some olive oil or avocado oil over the shrimp. Than sprinkle or rub them down with your seasoning mix. No they’re ready to cook! 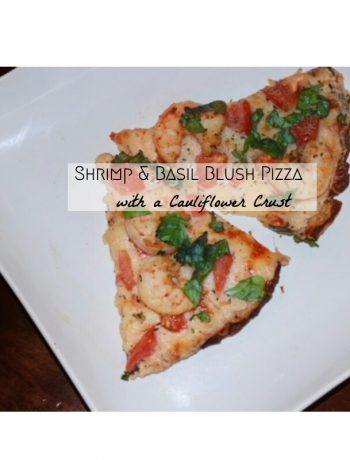 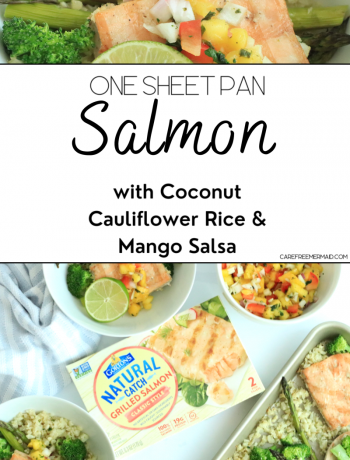 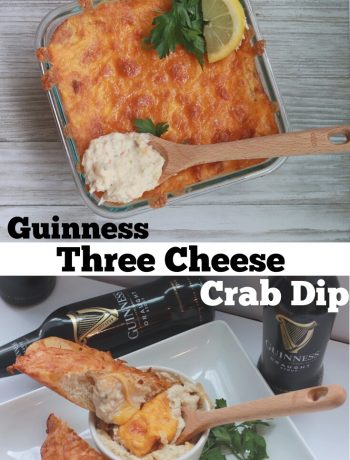 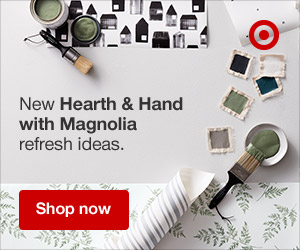 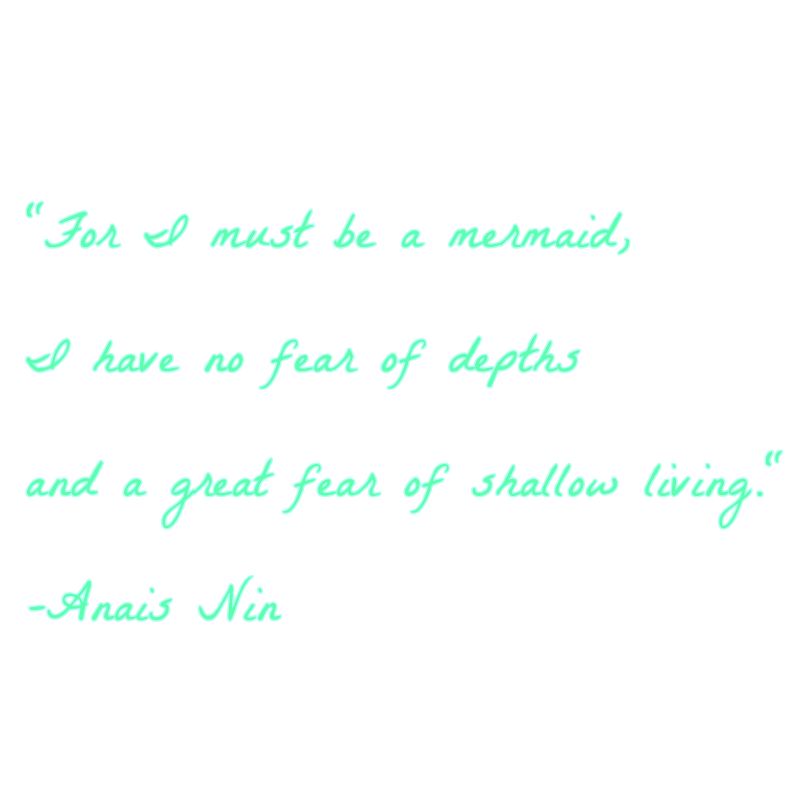